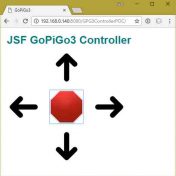 Now that you have constructed your GoPiGo3 robot car and can access its desktop from your PC, as explained in my previous article Raspberry Pi, Java, and the GoPiGo3 – Part 1: Setting up the GoPiGo3, you are ready to set up your coding environment. In this blog you will learn how to run the simple proof of concept application… Read more »