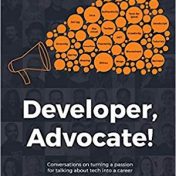 Developer, Advocate!Conversations on turning a passion for talking about tech into a careerBy Geertjan WielengaCopyright 2019 Published by Packt Publishing Ltd. I met Geertjan seven years ago when he contacted me on LinkedIn. He’d come across my profile and saw that I was a college teacher and he wanted to ask if I’d like to write a paper with him… Read more »